Our stores may be closed for now, but our experts are ready to take your call. We’re delivering safely too. Find out more.

Creating a mid-century modern kitchen and dining space? From sleek dining chairs to bold colours and accessories, we cover everything you need to know.
Design Inspiration Guides Hints & Tips 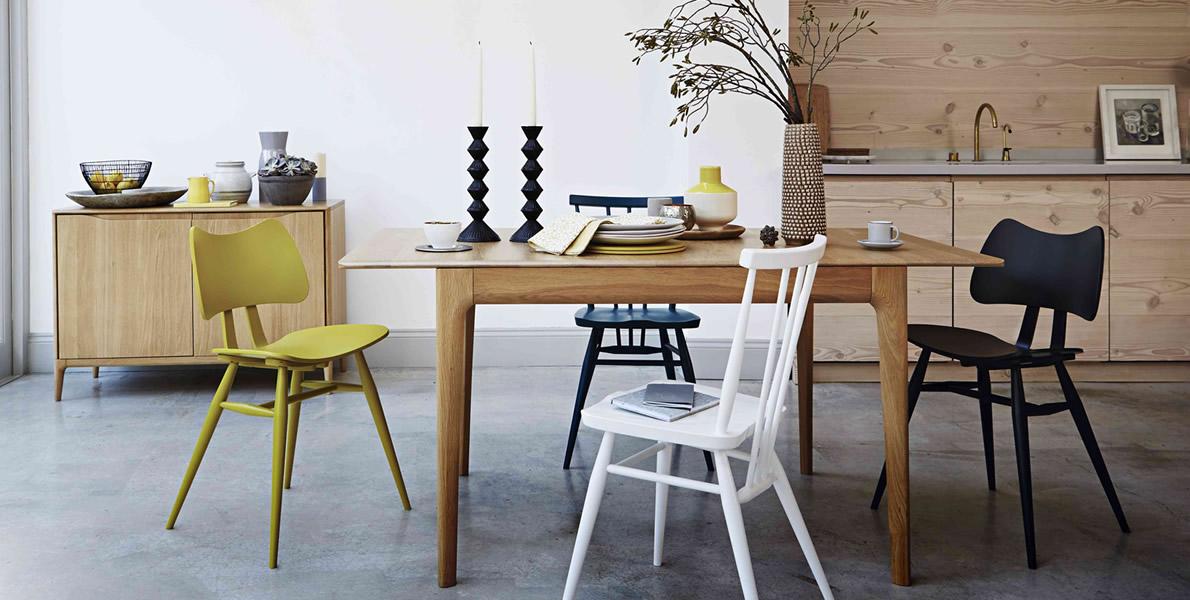 Interior trends are cyclical – those that were once popular will no doubt be popular again. But have you ever noticed how there’s one style that seems untouchable? A style that, despite being seven(ish) decades old, to this day looks ingeniously sleek and fashionable – with some designs feeling almost futuristic? We are of course talking about ‘mid-century modern’, a trend that (as the name suggests) dates back to the 1940s-60s and which has proven to have remarkable staying power.

While we might love that iconic 60’s style, it’s easy to overdo it, resulting in a look more outdated than outstanding. In short, there’s a fine line between retro-chic and plain old-fashioned. But – and it’s a big ‘but’ – when done correctly, the versatility of mid-century modern can help you create a home with timeless appeal.

It may feel a little hard to nail the look at first, but trust us, achieving a space that exudes ‘Mad Men’-esque, mid-century chic is a lot easier than you think. In this article we’re going to focus on the kitchen and dining areas of the home, which lend themselves particularly well to the sleek lines and smooth textures of the trend. Read on for all the design inspiration and tips you need to take your kitchen and dining spaces back in time, without putting them in a time capsule.

What is mid-century modern?

The mid-century modern design trend was inspired by modernism in art – a movement that sought to break away from the ornate flourishes of the Victorian, Gothic and Renaissance periods. A bold new take on design, it rejected these traditional forms entirely, aiming to bring simple, clean and functional styles to post-war homes, creating a timeless, understatedand elegant look.

Today, there are many approaches to mid-century modern but, luckily, whichever way you go about it the basic style principles stay the same. At its core, the trend is characterised by smooth, clean shapes with minimal detail. It’s all about the fuss-free and exceptionally sleek,with no room for ornate furniture, old-fashioned knick-knacks or flowery patterns.

Another key feature of the mid-century-modern trend is the contrasting use of traditional and non-traditional materials. For example, you’ll often find a mix of traditional wood (like walnut, oak or rosewood) and marble, with modern materials such as metal, glass and vinyl. It’s this juxtaposition of natural and man-made materials that creates that signature mid-century modern edge, and adds intrigue to a home’s interiors. This Phoenix dining table and chairs is a perfect example, showcasing a tasteful mix of smooth ceramic, matt black metal and a white marble-effect surface, resulting in a mid-century modern elegance.

Now to apply the methodology. First off – it’s important to remember that simplicity is key when it comes to furnishing your kitchen and dining room in a mid-century modern style. Steer clear of elaborate antique pieces that are embellished with decorative legs and trimmings. Instead, choose dining tables and chairs that are slender and contoured. For example, the ercol Originals collection has that iconic mid-century modern look, made from solid wood with tapered legs and elegantly curved lines. You can shake things up by mixingand matching your dining chairs with this charming Ercol Originals Loveseat and retrostacking chairs for a look that is both practical and aesthetically pleasing.

The wonderful thing about mid-century modern is the fact there are traditionally a wide range of colours to play with. From kitschy brights to earthy pared-back neutrals, as well as the contrast of black and white, you can really get experimenting – although it’s probably safest to keep your walls white or at least a pale shade of cream. This will then allow quirky or statement mid-century coloured furnishings to be the real stars of the show.

Choose from muted shades of grey and brown with these Cavendish chairs for an organic, contemporary aesthetic, or go bolder with mix-and-match reds and blues in the form of these striking Nexus Chairs, which are inspired by authentic Scandinavian design.

Monochrome can work just as well, so if bright colours aren’t your thing, try placing black kitchen chairs against a crisp white backdrop to create a striking, graphic look. 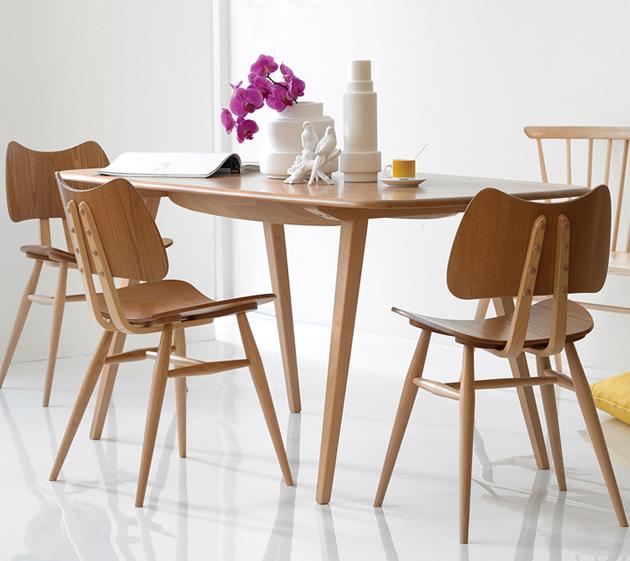 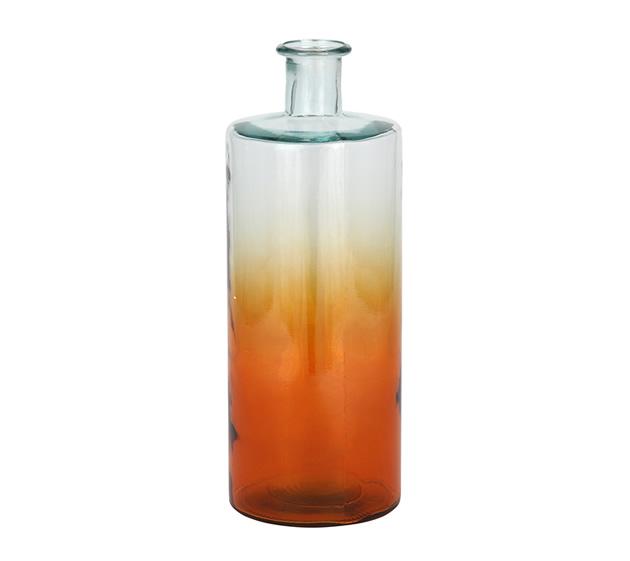 If you’re not up for completely revamping your kitchen and dining room, or you have the basics but just don’t know how to inject that last bit of style, it might be time to up your accessory game. In fact, it’s amazing how much you can transform a space just by mixing up a few of the finer details. But remember, don’t overdo it! Unfortunately for the accessory-happy among us, less is more when it comes to mid-century, so carefully chosenornamentation is key. Avoid mixing too many patterns and textures, instead pick a few statement pieces that embody the mid-century modern style and let them stand out in all their glory.

Adding finishing touches such as lighting, mirrors, tableware and wall art are perfect ways to re-style your space. A pendant ceiling light like this Orson 7 Light Pendant will add glamour to your dining and is the perfect example of mixing functionality with cutting-edge design.

Finally, be sure to dress your dining table with a vibrant, retro centrepiece like this Ombre Bottle Vase or simple, brightly coloured coasters and placemats to bring the space to life. You could also make a statement by adding a single, bold piece of wall art to the space, whether that be an abstract geometric piece or a graphic oil canvas.

Regardless of what your style is you can easily achieve a mid-century modern kitchen and dining room when you get into the right mindset. And what’s even better is the fact that – as history shows – this is one trend that’s well and truly future-proof! 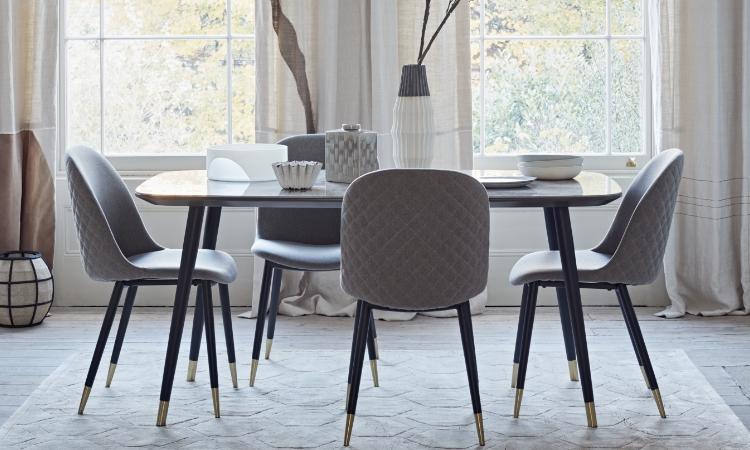 How to host a virtual dinner party

Connect with family and friends over a delicious meal – at a distance. Read on for our 7 top tips on hosting a successful virtual dinner party.
Read more
Facebook Twitter Google Plus Pinterest 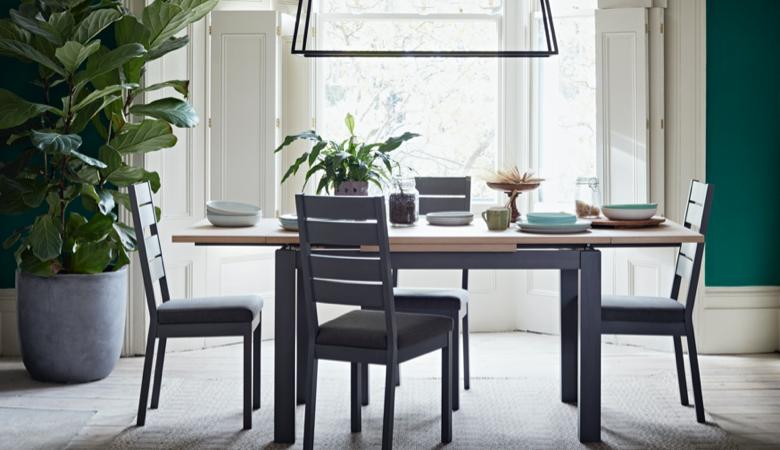 Get the modern country look

Declutter your home and make it feel bright and spacious with our ingenious storage for small spaces. Read on for clever storage ideas for small living rooms, dining rooms and bedrooms.
Read more
Facebook Twitter Google Plus Pinterest

We use cookies and other technologies to offer the best experience when shopping with us, for advertising and to provide social media features. By continuing, you agree to our use of cookie in accordance with our Cookie and Privacy policies.
Manage cookies
HERE’S £25 ON US
Pop your email below and we’ll send your welcome code right away. You’ll now get first dibs on sales, new arrivals, subscriber perks and all things interiors.
Unsubscribe at any time, see our privacy policy.
Offer valid on first orders of £250 or more, excluding Clearance.
Furniture Village Logo

£25 off
your first order

By subscribing to our newsletter, you will receive the latest news and
offers by email. You can unsubscribe at any time, see
email for terms and conditions.

Here is the code for £25 off your first order