EXTRA SALE OFFERS END IN:
20 Year structural
Guarantee
Lowest Price Promise
on all brands
Sign up for £25 off
Interest free credit available
on orders over £375*

From the ‘we’ve been expecting you, Mr Bond’ swivel chair, to The Matrix’s ruby armchairs – we look at some of the most iconic furniture from film and TV.
Hints & Tips Lifestyle

As the great interiors mastermind, Bunny Williams once said, “If you love something it will work, that is the only real rule.” And never is this truer than with furniture – in particular, those eye-catching, statement pieces that make your home stand out and your guests go, ‘Ooooooh!’ But sometimes it can be hard to find the spark that leads you to that lightbulb moment. That I must have it feeling, resulting in the purchase of all purchases – that definitive piece that will transform your home and take your love for it to new heights.

That’s why we’re here with an alternative way to revive your interiors mojo. Forget glossy magazines and Pinterest. Forget Google images and interior design blogs. It’s time to think outside the box, and look further afield for fresh ideas. And where better to do that than the world of TV and film – where some of the most iconic pieces of furniture in history can be found, usually adorned by world famous actors… 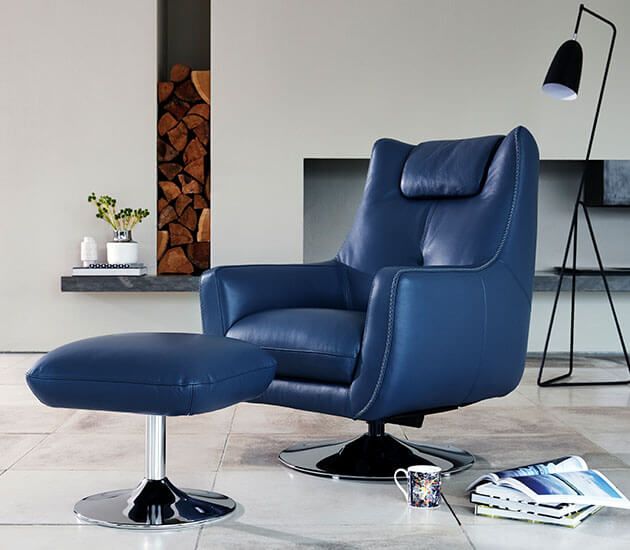 The ‘We’ve Been Expecting You, Mr Bond’ Swivel Chair from Bond

Possibly one of the most famous chairs ever to be caught on camera has to be supervillain Blofeld’s ominous looking swivel armchair in You Only Live Twice (1967). The chair itself was created by G Plan, and was recently auctioned for a cool $16,000 in 2014. One of the defining styles of the ‘60s, swivel chairs were found in suave offices and happened to provide the perfect prop for Blofeld’s image – white feline on lap, and all. But taken out of context, they are far from sinister, but are instead one of furniture’s most steadfast designs – a classic look that instantly uplifts a room with an air of chic retro-modernity.

The ‘Awwwwwwwww’ La-Z-Boy Recliner from Friends

Who said you can’t mix sleek design with other-worldly realms of comfort? Friends characters, Joey and Chandler, were well known for their undying love of their matching La-Z-Boy recliners, making for one of the most recognisable chair designs on TV. And who can blame them? Reclining chairs and sofas are a revelation for those who simply love to put their feet up at the end of the day for that unbeatable ‘awwwww’ feeling – as vocalised frequently by the lovable TV duo. And they look great too, like this Glider 3 seater leather recliner sofa, which is sleek, stylish and extends across all seats enabling you to take the nap to beat all naps. Okay, perhaps not a statement piece as such, but we think the kind of comfort and enduring style that comes with a reclining sofa makes the biggest statement of all.

The ‘Blue Pill or Red Pill’ Chesterfield from The Matrix

A valid rival for evil-genius-topped swivel chairs has to be the iconic pair of ruby Chesterfields from The Matrix. Here is the place where main characters, Morpheus and Neo, have the ‘blue pill or red pill’ conversation that ultimately leads to Neo’s discovery that the world he knows is a simulated reality. It’s one of the most famous scenes in film history, and we can’t help but think it just wouldn’t have had the same impact if they’d been sitting on a couple of nondescript sofas. It’s the imposing, grandiose look of the Chesterfields that gives the scene a feeling of depth. Red leather with plenty of rich, vintage appeal, they’re reminiscent of a time in history that had long ceased to exist in the dystopian future in which the film is set.

We said statement, now we’re giving you statement. It doesn’t get much more ‘out-there’ than the bright red, luscious looking Bocca Lip Sofa from the Austin Powers movie. ‘Tacks-ville!’ we hear you cry. And you’d be on-point if the sofa was placed in the wrong surroundings. But done right, a burst of red in a room can work wonders, and we’re even going to go ahead and say that the lip silhouette is utterly fabulous too. The original design belongs to surrealist artist, Salvador Dali, who created a lip sculpture in the form of a sofa in 1937, which went on to be an iconic image of the era’s art scene. In Austin Powers, the sofa represents the movie’s outrageousness, slapstick sexiness, and most of all the defining funky style of the ‘60s.

Another example of stylish ‘60s design is the orb-like egg chair, which characterises one of the most memorable scenes in ‘90s classic Men in Black. Despite being designed thirty years prior to the film by interiors innovator, Arne Jacobsen, the chairs add to the movie’s far-into-the-future vibe with their glossy, alien-like appeal. For the ‘best of the best of the best’ scene, Will Smith’s character, Agent J and a few other candidates sit in the egg chairs to take their first test to get into the secret organisation. Throughout, all candidates struggle to fill out their papers while sitting in the awkward chairs without a desk. It’s Agent J that eventually gets up and drags a large table from the centre of the room over to his egg chair (in usual Will Smith comedy fashion), so he can complete the test at ease. It’s said that the test is based on putting the candidates in an absurd situation to see how they handle things, and whether they’re capable of thinking outside the box. In that sense, the chairs are integral to the plot, making them another of movies’ greatest seating props – and the perfect inspiration for interior design.

The good thing about going to the big screen (or small screen) for furniture inspiration, is the fact that someone else has already done a lot of the leg work for you. Eye-catching props are as important to film and TV as epic soundtracks, stunning scenery and stellar acting. So, you can bet that if you see something you like on screen, it’s going to look just as outstanding in real life – if not more so. Say goodbye to the dull, the dreary and the over-done, and go for a statement piece of furniture that’s so original and so downright cool, it’s impressive enough for Hollywood. Get the lowdown on the biggest trends for 2022 with our stylist, Aneta Skoczek. She lets us in on what’s in, what’s not and her top picks from our collection. This year is all about feeling happy at home, being bold and embracing change.
Read more
Facebook Twitter Pinterest We use cookies and other technologies to offer the best experience when shopping with us, for advertising and to provide social media features. By continuing, you agree to our use of cookie in accordance with our Cookie and Privacy policies.
Manage cookies
Here's £25 off your first order

Here's £25 off your first order

Copy this code for £25 off your first order

We have also emailed this code to your

WELCOME0122
Copied: WELCOME0122
Continue Shopping
Call free on
0800 804 8879
LiveChat with
our experts
NEW! VirtualShop
appointments
Tap here to get £25 off your first purchase!